I’ve always imagined I was pretty familiar with the work of Claude Monet. There can’t be many people who haven’t seen an image of his waterlilies on a biscuit tin or those famous chilly winter scenes on a Christmas card.  When approaching this exhibition at the National Gallery I rather expected to see a lot of ‘old friends’ hung together for maximum impact, one of those shows which focus on glorious repetition of images. Not a bit of it.  This show is full of surprises. The surprises are not just in the subjects which Monet chose to paint – he was remarkably proficient by his early 20s and his style was clear to read – but in the imaginative curation of the show and juxtaposition of pictures you wouldn’t normally have thought would go together. And we are also treated to the chance to see paintings from galleries and private collections from around the world – a rare treat. 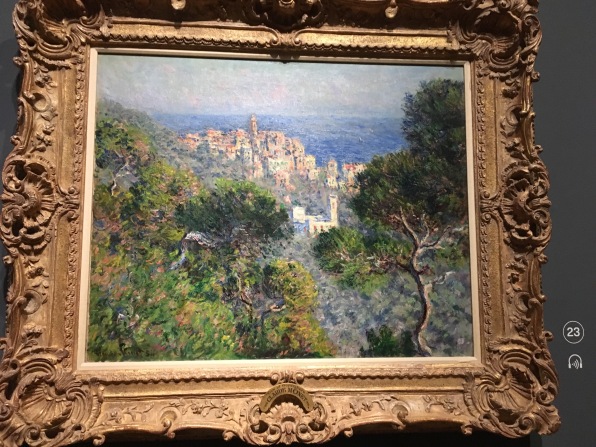 The room full of early years paintings was a revelation.  Monet clearly had a very acute eye for colour and form.  Apparently he wasn’t that keen on the formal training of art school and struck out on his own artistic journey in his mid 20s.  I really enjoyed seeing the paintings of places which resonated with him and landscapes which incorporated a compelling mix of wild nature and examples of architecture.  One forgets that the notion of the ‘picturesque’ was an English style which the French painters duly adopted; the seeking out of ancient places and buildings and the creating of composition which incorporated romantically ruined or old structures set in natural but stylised settings – a bit Claude Lorraine.

Above: Cleopatra’s Needles and Charing Cross Bridge about 1899

Some of the paintings appear to be unfinished.  Given that many of the works started life ‘en plein air’ one can only guess at the reasons why they never quite got the final treatment – did it start to rain, was there a cup of coffee to be drunk or did someone distract him with conversation?  We understand that many of the paintings begun outside were then taken indoors to his studio to be ‘worked up’.  This makes me love the wild and incomplete ones even more.  You get a real sense of place with these swift pictures which sketch in the basics and use large, gestural brush strokes to indicate skies, water and outline structures.  Having said that, these more finished pictures are gorgeous.  I understand Monet’s desire to paint not just the shape of buildings but the nature and atmosphere of the light which surrounds them.  Hence the repetition and the constant return to buildings or scenes such as Rouen Cathedral or views of London’s Thames, the bridges and newly completed Houses of Parliament.

As the curator, Monet scholar, Richard Thompson, points out, Monet was attracted to the newness of buildings, the way architecture creeps across the landscape and how dynamically buildings can contrast with the curves and organic shapes of nature. I loved the city paintings too, often painted several at a go from a strategically placed window so that he could have around eight canvases on the go at any time and move seamlessly from one to the other and the day progressed and the light and atmosphere changed. 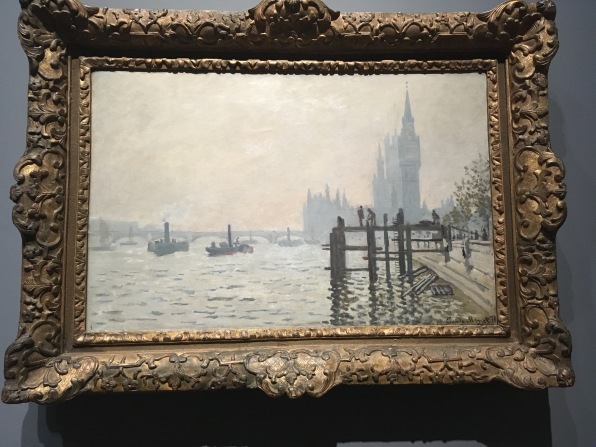 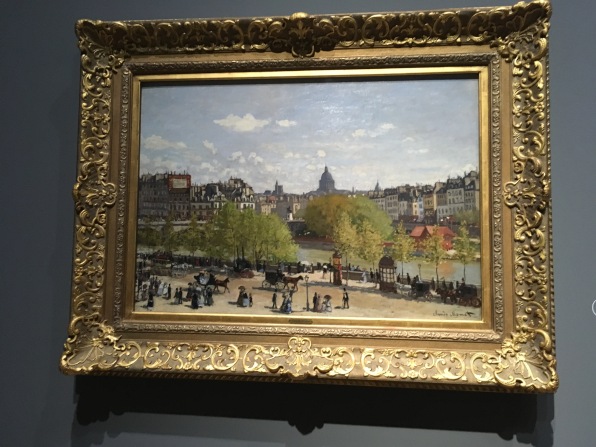 Above: The Thames below Westminster and Quai de Louvre

This show is an absolute joy and I’m rather tempted to go back again, very soon.