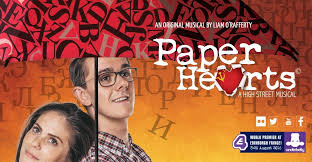 I saw this play on press night and reviewed it for Carn’s Theatre Passion.

An absolutely charming musical with characters you really care about

If you’ve ever wondered what goes on in an author’s mind when a story is being written, the delightful new musical, Paper Hearts, gives you a glimpse.

Young Atticus Smith is a writer who is easily distracted from his work as a shop assistant in a chaotic bookstore by the lure of his typewriter and the fictional world he has created. As Atticus types, the characters appear to us, playing out their drama set during the Bolshevik revolution in Russia where love, loss, trust and betrayal are the emotions which fuel the story. 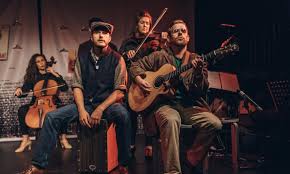 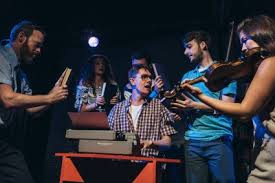 Paper Hearts, devised and written by Liam O’Rafferty, wowed audiences in Edinburgh during the 2016 Festival and the musical has been expanded by producer Denise Koch for its transfer to the Gatehouse Theatre in Highgate. The story unfolds at a cracking pace. We soon understand that Atticus, excellently played by Adam Small, is in an unsuccessful relationship with Alex, a sparky Sinead Wall, who also plays the lead heroine in the book he is writing.

His amiable boss, Norman, an expressive Matthew Atkins, drops the bombshell that the bookshop is going broke and he’s selling it to Literally Books, an online retailer which also happens to be owned by Atticus’s estranged father, the mercurial Roger.

To complicate the story, Atticus meets the feisty and literary Lilly Sprockett, played with panache by Gabriella Margulies, and falls in love with her over a kind of ‘bookathon’ – who can show off their knowledge of the most authors, books or characters – only to find that she is the new manager of the bookshop and has been having an affair with his father.

Director Tania Azevedo cleverly flips the scenes seamlessly from the contemporary love story to the fictional story as the revolutionary characters come to terms with their circumstances and the bookshop rom com gallops towards a satisfying resolution. You can’t help rooting for each set of characters with equal passion and concern.

All of the action is ably supported by an on-stage band, held tightly together by Daniel Jarvis, Musical Director, as the highly talented ensemble bass, cello, violin percussion and guitar appear as characters from the story and provide pacey and entertaining support for the contemporary players. The singing is excellent and the final number, Paper Hearts, is particularly strong and has been imaginatively choreographed by Lindsay McAllister.

‘To write a story is to give away your heart’, says Norman to Atticus. The able cast and team of Paper Hearts have given their hearts to this production and it is a joy to watch.