There’s something utterly enchanting and beguiling about seeing life in miniature.  You marvel at the sheer challenge of creating a piece of art which is just… so, so tiny.

This new show at the National Portrait gallery is a jewellery box of visual delights. You can borrow magnifying glasses to enlarge the tiny portraits, often oval or round and hidden away in beautiful boxes or pouches. It’s helpful that there’s a selection of materials on show which show how pigments were mixed in mussel shells, how the finest sable brushes were used to create the smallest details and how mini blobs of resin mixed with colour could resemble rubies and priceless gems.

Most of the miniatures on show are in remarkably good condition, perhaps bearing testament to the fact that these portraits were private; they were not displayed on walls or public places but kept in pockets, in carefully crafted frames or boxes, protected and gazed at by the owners at their discretion, maybe in secret. There’s something intensely personal about the faces we can gaze at.   Yes, we have the ‘famous faces’ – royalty, aristocrats, masters of derring-do of the day such as Sir Walter Raleigh and Sir Francis Drake.  And of course there are several of Queen Elizabeth I.

What they all have in common is a certain intensity.  Clearly drawn from life and then painstakingly painted, you feel the strong connection between artist and subject. The delicacy and detail demanded for the creation of a good likeness is matched by a fascination for clothing and jewellery and all the accoutrements of high fashion of the day.

I took a few photos of miniatures which particularly impressed me but really, they were ALL beautiful and I spent my time at the gallery in a kind of swoon of beauty as my eyes alighted upon each little marvel. 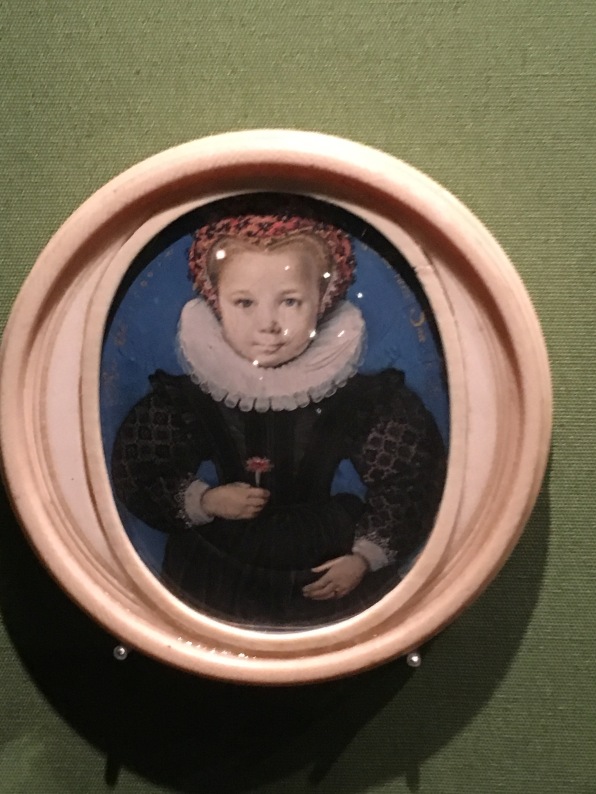 The exhibition majors on a ‘compare and contrast’ with the two miniature ‘giants’ of their day: Nicolas Hilliard and Isaac Oliver.  Both artists were contemporaries and reached the heady heights of royal patronage and were clearly much sought after by those able to afford their skills.  Hilliard was English, and trained as a goldsmith, before becoming a ‘limner’ – a miniature painter – while Oliver came from France and moved to England as a Huguenot refugee.  Hilliard seems to engage more closely with his subjects but Oliver makes them look gorgeous, using a particularly ‘soft-focus’ deftness with the brush.  These two pictures, above, are of sisters. They’ve been dressed similarly and you can see the family resemblance but each one’s character and personality is clear to see.

These two, above, by Hilliard are examples of gorgeous observation – on the top left we have Queen Elizabeth the First’s ‘favourite’ Dudley, Earl of Leicester, and then there’s the beautifully painted portrait of Henry, Prince of Wales.

I loved this portrait of an unknown man against a background of flames (representing burning, passionate love) by Hilliard and also this one of Venetia Stanley, who became Lady Digby, a renowned beauty of her day. 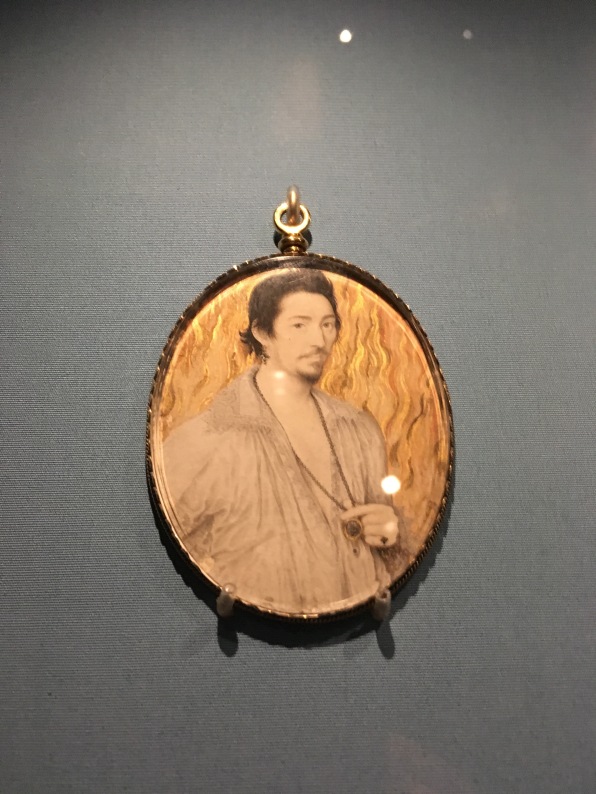